Whether you use the include statement or just have an inventory of code snippets, you can be consistent
and avoid recreating the wheel by accumulating a library of shell functions, tasks and variables.
A Simple Script to Try:
First lets make a quick script to create some files that we can later manipulate, then we will rename
them. Since these are simple examples, lets cheat a bit here, using the command line instead of a formal script.
Create the original files:
count=0;while [ $count ­lt 10 ]; do touch file_$count;let count=${count}+1; done

EXIT CODES:
Whenever a command is executed, upon completions a numeric value set which indicates whether the
command was successful or not. An exit value of 0 (zero) means success. Any non zero value indicates
non­success, usually 1 (one) and usually failure. In the case of a command like grep, and exit code of 1
does not really mean the command failed, but just that it did not find anything that matched the query.
An exit code can be forced with a ‘exit’ string such as this example place within an ‘if’ statement:
if
…some code…
else
echo ”    Operation Failed!”
exit 1
fi
If the ‘else’ line is matched, then the script exits with a status of 1
You can also test for success of a command by retrieving the exit code, which is represented by the
variable “$?” using something like this:
…some command…
if [ $? ­eq 0 ] ; then
…success, carry on
or, more you may prefer this, slightly more refined method:
…some command…
RET_VAL=”$?”
if [ $RET_VAL ­eq 0 ] ; then
…success, carry on
The thing to remember is that the variable “$?” will be overwritten with the next commands
completion unless you save it into a unique variable as in the second example.
6 of 10
Linux BASH Shell Scripting
Basics of Creating and Utilizing BASH Scripts
Pete Nesbitt
May 2006
How to use INCLUDE FILES:
You can store functions in one or more files outside your main script. In order to utilize these
functions, you must have an “include” statement, then you can just call them as you would any other
locally defined function. The include line does not actually have a syntax, it simply reads in additional
functions.
Here we are adding the file install_lib, which contains a series of functions.
. src/install_libs  (note the leading ‘dot space’ meaning ‘look in this file plus…’)
INTERIGATING FOR VARIABLES:
Although the BASH shell is included in most Unix and Linux systems, some of the system commands
or utilities are located in different directories. If you want your script to be truly portable, you must
take this into account. Below is one of many ways to do it.
We read a file if the command names, formatted one command per line.
It’s contents may look like this:
rm
grep
sed
awk
Then we search for them and save the output to an include file:
(the shortfall here is the ‘which’  command must be available, a more complex method is used in the
Flac Jacket scripts)
while read CMD_VAR
do
CMD_NAME=”`echo $CMD_VAR|` which tr` [:lower:]  [:upper:]`”
echo “${CMD_NAME}=`which  ${CMD_VAR}`” >> command_include_file
done < command_list.txt 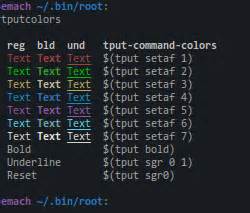 IntroductionWhat is sed?A Stream EDitor is used to perform basic transformations on text read from a file or…

use INCLUDE FILESYou can store functions in one or more files outside your main script. In order to…